It wasn’t that long ago I said to Joel, “We should have backup insulin just in case Luke’s pump ever stops working.” When I said that, I didn’t expect us to need that backup plan so soon!

Yesterday, just before dinner, Luke pulled out his pump to bolus for the sandwich Joel made him. I was about to leave for a school function and Luke mumbles, “Um, mom…” He showed me his pump and it said, “PUMP MALFUNCTION.”

I managed to get to school and see about three student presentations before Joel called and asked me to come home. Luke was freaking out about what to do next. That stressed Joel out. And, really, they just wanted someone else to talk through a temporary solution.

First, Joel called Tandem and told them what happened. Apparently, the speaker malfunctioned in his pump and it shut the whole thing down! They said they’d ship out a new one and it should arrive the following day.

Then, Joel and I drove over to the nearest pharmacy and bought ten teeny tiny syringes. This was the first time ever that Luke had to give himself insulin shots with a syringe. He was not impressed.

He was so not impressed, he opted to go carb-free for both breakfast and lunch. Since it was only for a day, we thought this would be a fine solution. He packed his lunch for the first time since he started middle school- meat and cheese. We told him he had to have some carbs for dinner. This is when he had to do his syringe shot. 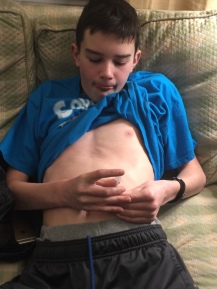 Fortunately, we still had Lantus (slow-acting insulin) pens leftover from before he was on the pump. This is his nighttime shot. It keeps his blood sugar steady between meals. (Normally, his pump secretes a low amount of insulin throughout the day to take the place of the Lantus.)

We reverted back to our days as new T1 parents that night, setting an alarm for 2:00 a.m. to do a sugar check… just to make sure he’s where he should be, sugar-wise. (Which he was!)

Unfortunately, the pump did not arrive the following day. So he went carb-free for another breakfast and another lunch. Then, had carbs and another syringe shot for dinner. Then, he had another Lantus shot and we had another 2:00 a.m. alarm.

However, he was so excited to see his pump the next day! I don’t think he’s ever wanted to do a site insertion so badly.

So what did we learn from this whole experience that we can pass on to all of you? Have a plan in place for when the pump goes out! We now have extra syringes if it happens again (I sure hope it doesn’t, though!). We still have Lantus pens that aren’t expired (for now). I think we’re good if it happens again. It won’t be a fun time for Luke, but he will keep his sugars in check!