Luke and trick or treating go way back, from his first Halloween as a firefighter to last year as a steampunker.

Dressing up has always been the highlight of Halloween for Luke. He was never really interested in the candy part of trick or treating.

Not being a fan of candy has always been a bonus for our family… for Joel and me because we could easily raid his stash and he didn’t care at all. And now, for Luke, because while we let him eat candy still, it’s always best for him that he doesn’t.

The past few years, we’ve left it up to Luke whether or not he wants to trick or treat. Up until last year it was always a definite YES!

So far this year, he is still on the fence. As of yesterday, he wants to dress up for sure, as a Pokemon trainer. But he’s not sure if he wants to go door-to-door or not. He may help pass candy out at Grandma & Grandpa’s house. He may “trick or treat” for Pokemon candy. (PokemonGo has a special Halloween event where you get double candy when you catch Pokemon… and this “candy” is carb-free!)

Last year, we found a couple of helpful carb-counting guides for Halloween candy. I thought I’d share a couple with you, too! The first one is from Beyond Type 1. 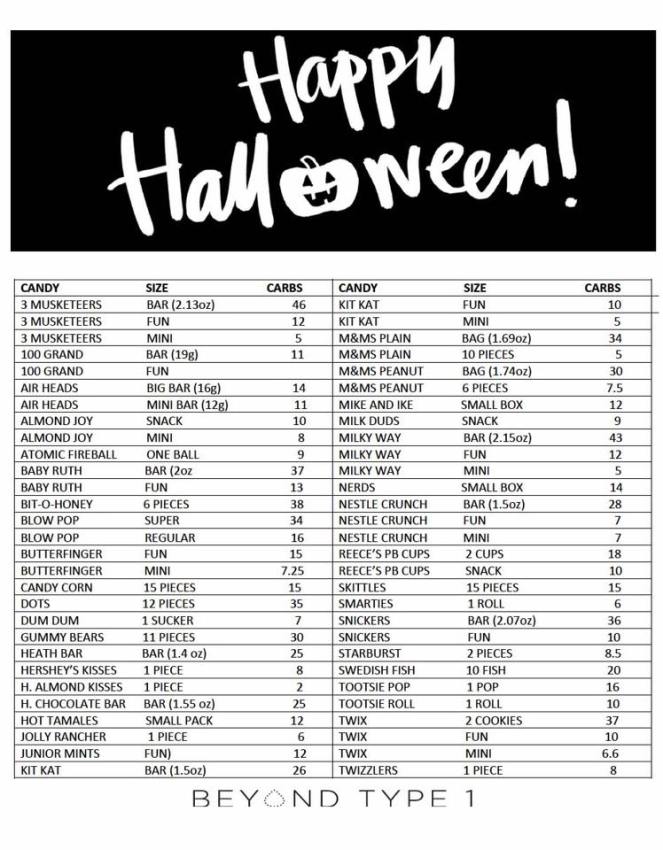 And the following one is from JDRF. I plan to have these handy just in case Luke decides to get real candy instead of Pokemon candy.

I’ve included the links to both of the charts so you can easily print them off. And don’t forget to hit the after-Halloween clearance candy to treat those lows!