So far, we’re pretty okay with endo days. We get a day off of school. We go out for lunch. And, we always get to baffle the endo.

As most of you know, Luke was diagnosed over a year ago- in June 2015. His A1c was high, of course. I can’t remember exactly what it was… 11 something, maybe 14 something. I just remember it was high. Each appointment it gradually went down… 8… 7… 6… 5… until our last appointment in May, which it was 4.6%. We kind of figured that’s about as low as we’d ever see. And we were right. So far anyway.

Today’s appointment sure didn’t disappoint, though! Luke’s latest A1c is a 5.2%! When our endo came in with the new A1c and his Dexcom chart, the first thing she said to us was, “How do you do this!?” I was a little confused at first, but quickly realized she was pointing to his Dex chart and asking us how we got such a straight line. 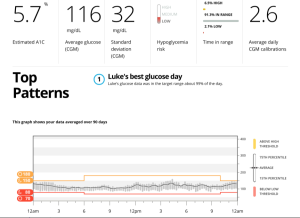 The question kind of caught me off guard. I had never really thought about it before. She asked if he eats any carbs at all? Uh, yeah. Sometimes he eats a crazy amount of carbs! She asked when he usually boluses… before he eats, has for over a year. I asked if he could still be in honeymoon, a year and two months later. She said he could be, but it would definitely be a pretty long honeymoon.

So, why? Here are some reasons I’ve thought for our little mystery…

*When he does eat carbs, we make sure he has plenty of protein to eat with his carbs. Today’s mac and cheese was paired with a chicken breast. Waffles for breakfast? He puts peanut butter on them. When he’s craving pizza? Thin crust with as many meats on it as possible.

*Luke boluses before his meals. Sometimes it’s 5-10 minutes before. Sometimes it’s just before he takes his first bite. The beauty of a pump is if he’s still hungry, he can just bolus some more. He downfall to bolusing before he eats is he has to eat everything he bolused for.

*We primarily save juices and candies for low treatment. He has probably had one sugary drink since he was diagnosed with T1 and sugary candy a handful of times. Fortunately, he was never a huge fan of these things to begin with, so it’s not hard for him to resist.

*Luke is super active. He swims competitively almost year-round. He loves to ride his scooter. He walks a lot, especially when he’s hunting Pokemon.

*He is very much hypo-aware. He almost immediately feels a low and can correct it before it gets too low. (I know this is tricky and I feel so blessed that he feels lows so well.) 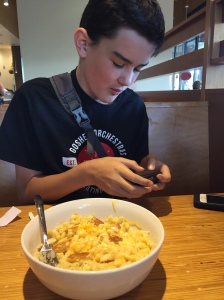 *We have always included Luke in diabetes education. When he was on insulin pens, we would have him calculate his doses along side of us and we’d compare them. Now that he’s on a pump, he’s counting his own carbs and double & triple checking them against each other with different counts online. Then, we compare our counts together. I fully trust him to spend the night at his grandparents’ or a friend’s house and know 100% what to do in diabetes management.

I’m definitely not saying if you do all of these things, you will have no T1 issues. Every person is different and their bodies react differently to diabetes. And, as nice as this is, I do not expect it to go this well for the rest of his life. (Although I would be elated if it did!)

What are your tricks to keeping your sugar in check? I’d love to hear!