Last December, I posted a few of Luke’s “zero snacks.” These are snacks that he can usually eat without bolusing because they are either low carb or don’t have carbs at all. As you can imagine, eating the same low carb foods over and over can get old. So we are always looking for new ideas for low carb snacking. Here are some of our latest… 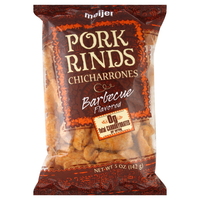 When Luke wants to munch on something crunchy, these are his go-to snack. He typically likes the BBQ flavor, but will sometimes get original or the spicy ones.

As previously stated, he’s a big fan of strawberries. However, he learned he can’t eat an entire carton at a time without bolusing. A non-bolused snack would consist of 5-6 strawberries.

This isn’t a snack he gets often because rotisserie chickens are pricey! But when they’re on sale, I grab one and make chicken salad. I just take all of the chicken off the bones & mix it up with a little mayo and some Italian seasoning and parmesan cheese. Luke will seriously eat through an entire chicken’s-worth in 24 hours.

While these are obviously not something to eat, he was so excited to find a juice-type drink for only 2 carbs! The only bad thing about these are they come in those plastic barrels and I find them all over the house! (Which may or may not be the reason we are on a hiatus from Little Hug Fruit Barrels right now!)

And while I was searching for pictures of these low carb snacks, I happened upon a new low carb snack, Coco-Roons, and I’m curious! Are they worth the price? (Between $10 and $18 for a 6.2 oz package!?) If it’s something Luke would like, I’d splurge for him now and then.  I think  he would want to start with the Vanilla Maple flavor.